Secure Admission into 200 Level without Jamb in any university - Call 08034575848 JAMB Apprehends Ghost Writer Planning to Take UTME for 64 Candidates, Cancels Results in Abia | News From Nigeria Universities and Polytechnics

.The Joint Admissions and Matriculation Board says it apprehended an individual it described as a “notorious cheat” who had registered for the UTME 64 times, with the intention of writing the examination for 64 candidates. The board revealed that no fewer than 100 culprits had been nabbed by security operatives across Nigeria during the just concluded UTME, and malpractice was prevalent in virtually all the states of the federation, including Abuja.

In its Weekly Bulletin released in Abuja on Monday by its spokesperson, Dr. Fabian Benjamin, JAMB said the fraudsters engaged in multiple registrations to enable impersonation during the examination. The board said the arrest of the culprits was made possible by the thorough and mandatory identity checks conducted on candidates, with the aim of fishing out professional ghost writers before the release of the results. 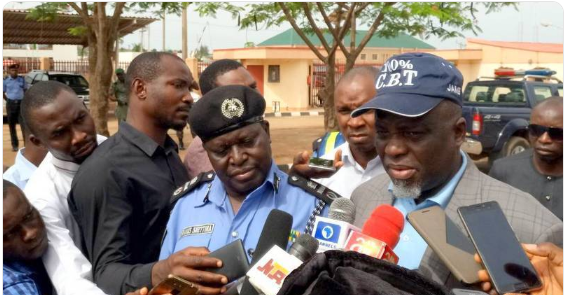 Also, the board disclosed that it had cancelled the results of two Computer Based Test centres, Heritage and Infinity CBT centre, and Okwyzil Computer Institute Comprehensive School, Ugwunabo, in Abia State, over what it described as “widespread irregularities” during the UTME. It said that all the results of the examination sessions conducted by the Board in the two centres from April 11 to 18 were null and void.

You can now Reprint Your Jamb UTME 2020 Exam Slip

How to retrieve your jamb E-facility and profile Password